The purpose of correcting a Athena scored shot's location is to correct obvious errors only. These may occur if a shot doubles up on the previously fired shot, or a shot is near the edge of the aiming bull.

There are two ways to open the Athena Edit Shot From.

•On the Range Control tab, double click the "Last Shot" column, in the row representing the Target in question. Only the last shot fired can be edited with this method. When Targets are in practice mode, this is the only way to open the form.

•On Match Scoring, double click any shot. This method only works when a match is on going.

With the Athena Edit Shot Form open, a view of the scored shot will appear. If the Stat Officer agrees that an obvious error occurred while scoring, use the mouse to adjust the shot's location. Make sure the "Edit this Shot" option is selected. When done, click the Accept Changes button. This may also need to be done in the event of a Double Loaded Shot. 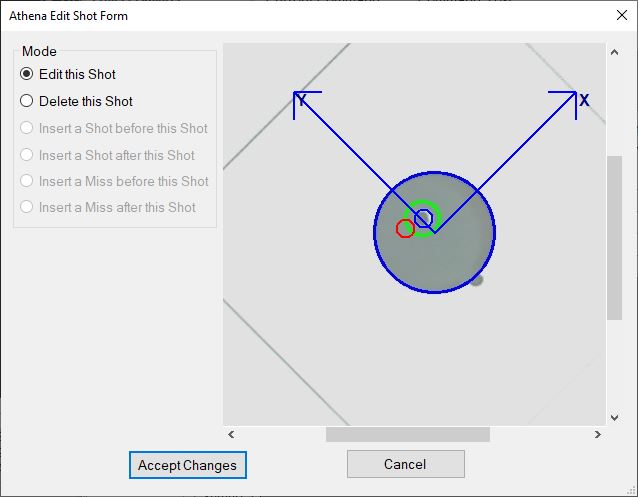 The photos that you see on the athlete Monitors are exactly the same photos you have in Orion, but with slightly different augmentations. The big difference is the photos on the Monitors are read only, while the ones in Orion's Athena Edit Shot Form the location of the shot can be changed.

﻿ * The large blue circle is the found aiming bull. Shown in both the Monitor and Orion

﻿ * The medium size green circle is the scored shot by Orion. This is purposefully drawn larger than the bullet hole, and shown in both the Monitor and Orion.

﻿ ﻿* The small blue circle, only shown in Orion, is the current scored location of the shot. When you first bring up the validation form in Orion it should be centered in the middle of the green circle.

﻿ * The medium size yellow circles, only shown on the Monitors, are the location of the previous shots as they advance on the witness tape. Because the tape drive isn't perfectly accurate, these will not be displayed accurately either.