The error message, "Aiming bull distortion detected" is displayed when Orion detects distortion in the target image. The image below shows such an example. The physical aiming bull does not line up well with the projected image of the aiming bull. In this particular case, although it can't be seen easily with this photo, the target was photographed when it was not flat. Warping of the target then leads to this distortion. 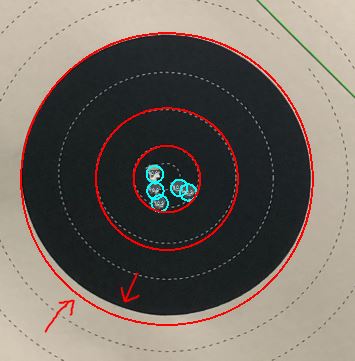 There are a few causes for aiming bull distortion:

•The mobile device's camera has not been properly calibrated

•The target was not flat when the photo was taken.

•Photograph was taken at an extreme angle.

When you review a target with this warning there are a few things you should do to correct it.

1.Despite the distortion, did Orion still correctly score the target?
Distortion is largest in the outer rings of the target, often times the inner rings will show no or limited distortion. If you have target whose shots are near the center, like in the image above, Orion may have correctly score the target. If this is the case, the warning can be ignored. To remove the warning (and yellow highlighting) right click on the target image and select "Ignore Warning Message."

2.Manually correct any miss-cored shots.
If there is a shot that clearly did not receive the correct score, for example a 6 that should of been a 7, you may simply remove the errant shot and manually place a shot with the correct score. To remove a shot hold down the SHIFT key and double click it. To manually place a shot hold down the ALT key and double click on the target when the shot should be.

3.Retake the target image.
If there is a shot that is near a scoring ring with distortion, or there are many shots that would need to be corrected, it is best to retake the photo of the target.