Scanning and scoring same target twice, why do I sometimes get different score values?

In a perfect world, if the same target is scored twice by the same Orion Scoring system, or by two different Orion Scoring Systems, the exact same score value will be assigned both times. In the real world though, it is possible, due to numerous minute differences, that a difference may exists between the score value of the two targets. This does not mean one system is right and the other is wrong. Instead both systems likely scored each shot correctly. Understanding this apparent contradiction requires a deeper explanation of the scoring process.

A key concept to understand is that there is no such thing as a “perfect scoring system.” Every scoring system makes some microscopic errors. The type, magnitude, and cause of these errors differ from one scoring system to the next, but all scoring systems have errors. Even if one could magically reproduce the exact same shot and score it with the exact same system at a later time, factors minute as temperature, humidity, and dust will cause scoring differences.

The term “score” when used in the context of an electronic scoring system does not intrinsically mean that a shot is a 10, 9, 8, etc. in relation to printed scoring rings on a target. Rather “score” means the radial location of the shot center relative to the target center as calculated by the scoring system. The score of a shot scored electronically is the distance from the center of the shot hole to the center of the aiming bull. This is also known as the “radial distance.” The “score value” is derived from the calculated radial distance.

Instead of requiring the impossible standard of a “perfect” scoring system, shooting governing bodies require scoring systems to score within an allowable tolerance. For example, at the highest level of competition, the International Shooting Sports Federation (ISSF) requires electronic targets to score within one half of one decimal ring. On an Air Rifle target this means a maximum scoring error of .125mm is acceptable. The tested scoring accuracy of the Orion Scoring System is well within this international standard. We must also note that the practical accuracy of manual scoring will almost never meet this international standard.

The Role of “Obvious Errors” in Orion.

If a shot is scored within this allowable tolerance, it is considered a “correctly scored shot.” Again, this does not mean that a scored shot will have the same score value as it would be given with an imaginary perfect target, rather that the scored shot is within the allowable scoring tolerance. In rare cases, an electronic scoring system will score a shot outside of the allowable scoring tolerance. This is true for all electronic scoring systems. Competition rulebooks have specific rules to govern how match officials must deal with these “incorrectly scored shots.” Electronic scoring targets use witness strips or backing cards to help catch these errors. Target reading machines or systems like Orion use the original target and the scanned target image to catch these errors.

With Orion the term “obvious error” is synonymous with “incorrectly scored shot.” This is because if a shot is scored outside of the allowable tolerance, this error will be obvious to the Statistical Officer when it is reviewed within the software. In Orion, the “scored shot” is represented with a red or blue circle. The “actual shot” is the shot hole as seen in the scanned and digitized target image. When the two reasonably correspond with each other it is a correctly scored shot. When the scored shot is not a reasonable representation of the actual shot hole then it is an obvious error.

Examples of correctly scored shots. There are not obvious errors. 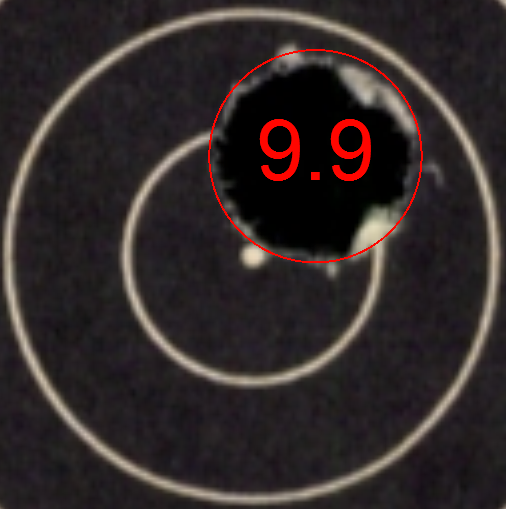 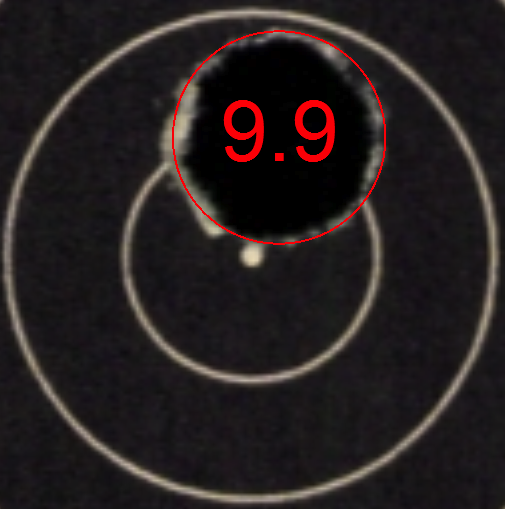 Examples of obvious errors. The stat officer should make a manual correction in these instances. 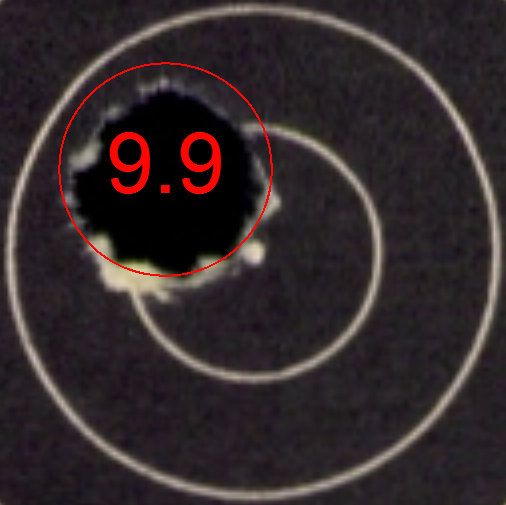 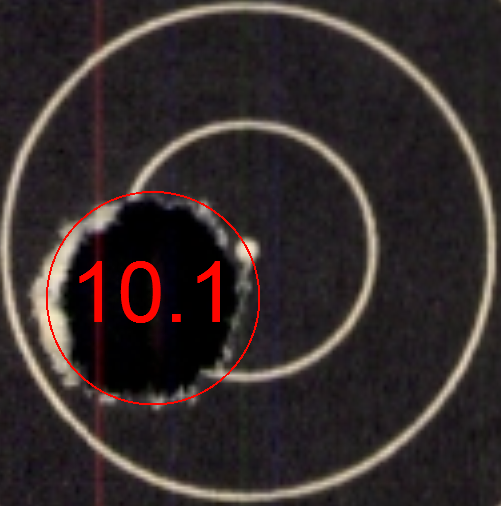 Scoring Rings Cannot Be Used to Judge the Value of an Orion-Scored Shot.

The scoring rings printed on the target are not relevant to the score value Orion assigns to a shot. The scoring rings are only there so shooters will have a reference to adjust sights and know their approximate scores. While a scored shot may appear to touch a printed scoring ring, this by itself cannot be used to claim Orion made a scoring error. Orion and paper targets use two different methods of scoring. Orion measures the distance from the center of the aiming bull to the center of the shot hole. Paper target scoring compares the edge of a shot hole with the edge of a scoring ring and is subject to its own inaccuracies. One method cannot be used to check the other. What must be checked instead is whether Orion’s scored shot is a reasonable interpretation of the actual shot hole; that is, did Orion find the shot hole correctly or make an obvious error.

Statistical Officers who operate the Orion system bear a great deal of responsibility. This is because they must judge what is or what is not an obvious error and make appropriate manual corrections only when warranted. Thankfully obvious errors are rare. Nevertheless, when shots are questioned, it is important that Statistical Officers conduct themselves in a precise, professional, and neutral manner while practicing the highest standards of integrity. Since it is impossible for a Statistical Officer to quantitatively measure the accuracy of a given shot he or she must instead rely on their qualitative judgment when determining obvious errors. Statistical Officers must never be influenced by shooter’s or coach’s arguments, the score value of a shot, or any personal feelings for or against a competitor.

Statistical Officers are analogous to instant replay referees in other sports. They are looking for incontrovertible evidence to overturn a score. One Statistical Officer may interpret a shot slightly different from another Statistical Officer. The reality is that a Statistical Officer will also infrequently misjudge obvious errors. Their judgment, whether right or wrong, is part of the sport and their decisions are final. Every sport has these types of referee decisions, this just happens to be shooting’s version of a referee call.

Causes of Scoring Errors Within Orion

A scoring system like Orion is very accurate and consistently scores shots within the allowable International tolerance. But like all "real" scoring systems will deviate from a "perfect" scoring system. In Orion's case the following can all cause minute scoring errors.

•Cleanliness of the scanner.

•Targets that have been mishandled or handled excessively.

•Humidity, temperature, and moisture on the target.

•Precise levels of a scanners brightness and contrast.

•Precise angle a targets was scanned in at.

The first two, if not controlled by the Orion user can cause larger scoring errors. Therefor it is important in all cases to keep the Orion scanner clean and minimize the amount of handling a target receives after it was shot. Weather related causes are more difficult to control. To minimize effects of temperature and humidity targets should be scanned in as soon as possible after they were shot. Targets shot outdoors should either be protected from rain, or dried thoroughly before scanned. The last two points are very minute. Provided targets were scanned in at reasonable levels (e.g. default settings on the scanner) Orion effectively compensates for these differences.