BB Guns shoot spherical bullets at low velocities. As a result they do not always make clean shot holes, or the bullet hole will collapse in on itself. When this happens Orion has a difficult time finding the precise location of the shot and will error on the side of caution. Orion will purposefully not score a shot if it can not score it accurately. Instead Orion will leave the shot undetected and flag the target for human intervention.

The following should be done for each unscored shot:

1.Zoom in on the aiming bull that contains the unscored shot.

2.With your mouse, double click near the center of the shot.

The double click activates Orion's identify a shot feature. Orion uses the location of the mouse as the hint, then scores the shot in that area digitally.

If you are seeing a large number of unscored (or poorly scored) shots, it may be necessary to adjust the BB Gun Sensitivity settings to suit your needs. Lower numbers (into the negatives) will help you find shots that Orion is not seeing. Higher numbers will reduce phantom shots being found.

Generally the BB Gun sensitivity settings are specific to individual needs, and will require some testing. We recommend not moving them more than a single digit in either direction when making adjustments initially. 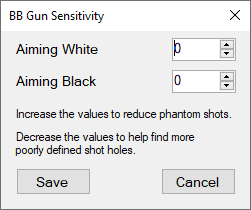 This menu can be found in Match > Score > BB Gun Sensitivity

1.Only adjust the values using the up and down arrows by one click at a time.

4.If additional adjustments are needed, go back to step 1.

Default values are as they appear in image above.

When a shooter fires more than one shot on an aiming bull, but leaves a different aiming bull blank, this is known as an internal cross fire. According to NRA Rule 14.7 the shooter is penalized 1 point for each occurrence.

The following should be done for each internal cross fire:

1.Identify and select the highest value shot on the aiming bull.

oSelect a shot by clicking near the center of the shot. Once selected, the shot turns red.

2.Right click and on the pop up menu select "Mark as Internal Cross Fire."

oOrion will mark that shot as an internal cross fire and assess a 1 point penalty per rule 14.7.